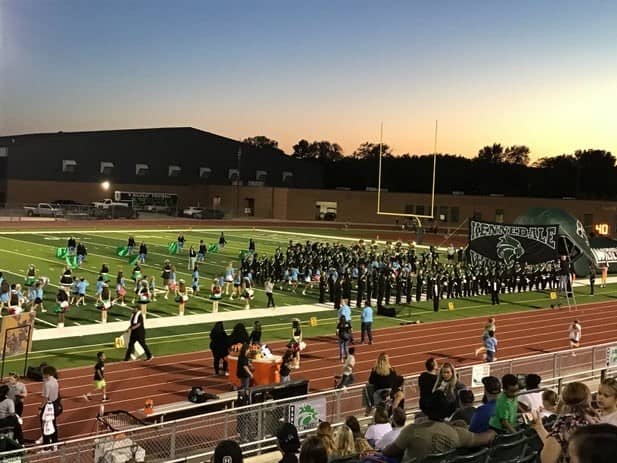 (Information & photo for the game was provided by Jeff Sisemore)

In District 6-4A you are either a player or you are not. Fort Worth Carter-Riverside is one of those teams with few cards to play. It was an easy win for the Cats. The game improved Kennedale’s record to 4-3 overall and 3-1 in district play. The Eagles fell to 0-4 in the district and 3-4 for the year.

It was 30-0 after the first quarter of play and the Wildcats tacked on another 21 in the Q2 to give Kennedale a super majority of 51 points to none at the half. In the third, a mix of non-starters added 16 more points to make the score 67-0. Using a running clock in the 2nd half the game ended quickly.

In other district action …

Lake Worth walked over FW Worth Diamond Hill last night 66-0. This kept Lake Worth atop the six-team district standings with a clean 4-0 record and 6-1 overall.

Diamond Hill-Jarvis (0-7, 0-4) is Kennedale’s next opponent in another Thursday game next week at Kennedale beginning at 7:30 pm.

Western Hills (5-2, 3-1) defeated Castleberry (1-6, 1-3) 50-36 Thursday evening. Western Hills defeated Eastern Hills 30-28 last week to keep abreast of Kennedale in the race for one of the top spots in the district. Western Hills has a big game ahead next week with Lake Worth before meeting Kennedale the following week in an 11:00 am Saturday match-up at Farrington Field (September 29).

FW Dunbar (3-3, 3-0) defeated Carter-Riverside last week 44-14 and takes on FW Eastern Hills (3-3, 1-2) this Saturday. Dunbar shares the top spot in District 6-4A with Lake Worth but has yet to play either Kennedale or the Bullfrogs. The Dunbar showdown with Kennedale comes in the last game of the season on Friday, November 4 at Kennedale. Game time is set for 7:30 pm.