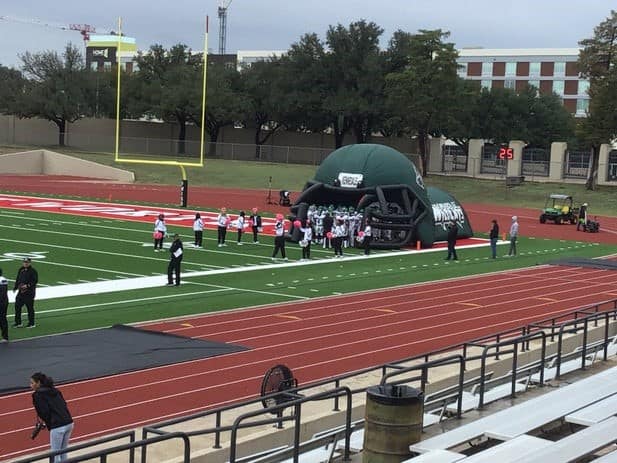 Info and photo used was provided by Jeff Sisemore and MaxPreps

The Kennedale Wildcats met an upper-tier team in District 6/4A away from the secure confines of the Wildcat’s home field and won a convincing victory. Maybe from the coaching staff, it was just the feeling of satisfaction. It did add at least a layer of needed confidence as the confrontation with the Dunbar Wildcats looms this Friday. Both Kennedale and Dunbar have identical district records of 5-1.

More on that contest to follow in another article later this week.

It was not an easy walk despite the final score. Western Hills was able to make some long drives downfield only to be denied in the shadows of the Wildcat goal line. It has been a while since the defense had such a challenge. It was a good workout and needed testing of skills and discipline as the team moves to a final season showdown and into the playoffs.

Oh yes, the Wildcats qualified for the playoffs once again and for the 22nd straight year.

The Wildcat offense also proved equal to the challenge and had several multiple-play drives while scoring four touchdowns. Note: The Kennedale defense scored the other. This was not like recent games when the defense handed the offense the ball in the opponents’ backyard often with 25 yards or less to score.

It is not that the Cats haven’t been winning and winning by huge numbers but the games were mind-numbing affairs where the offense was on the field three plays or less and there was a score. The same for the defense with three defensive plays and a forced punt or some other typed of turnover. Their practices were harder. This game was a real challenge, maybe, not as great as feared but still a good hard workout success.

One concern might be the three Kennedale turnovers – 3 fumbles and 1 interception. It was wet but it will be wetter still this Friday. Dunbar likes to go for the ball even before a tackle is secure. Maybe it is a fallout of watching the pros too much but the chance of stripping the ball from a runner or receiver shows up better than a straight-up hardnose tackle. Kennedale will have to guard against this tendency.

Highlights from the Kennedale/Western Hills game of Saturday last …

QUARTER ONE – No one scores

Give some change and help Mr. Mayor and the Council win the annual Red Kettle...