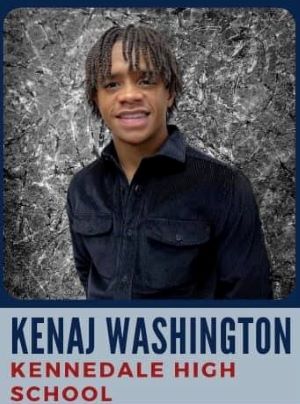 This article is a reprint (with editing) from www.DaveyOBrien.org

FORT WORTH, Texas (Jan. 11, 2022) – The Davey O’Brien Foundation has revealed the five finalists for the 36th Annual Davey O’Brien High School Scholarship Award. The scholarship, underwritten by Higginbotham and Simmons Bank, is presented each January to an exceptional senior student-athlete in North Texas.

The recipient of the $30,000 scholarship will be announced Tuesday, Jan. 18. The Foundation will award $2,500 scholarships to each of the four remaining finalists. Recipients of the High School Scholarship Award are chosen on the basis of scholastic achievements, community service, character, leadership, and varsity sports participation. As part of the selection process, the committee will interview all five finalists this week.

Since its founding, the Foundation has distributed over $1.2 million in scholarships and university grants to help high school and college athletes transform leadership on the field to leadership in life. The winner will be honored at the 45th Davey O’Brien Awards Dinner at the Fort Worth Club on Monday, Feb. 21.

Kenaj Washington ranks fifth out of 223 students with a 4.43 GPA on a 5.0 scale. He has earned multiple varsity letters in powerlifting, football and track. He placed eighth at the 2021 UIL Class 4A State Championships in powerlifting after finishing as the regional champion. Washington was an all-district selection in football as a senior while also serving as a team captain and member of Leadership Council. An AP Scholar with Distinction and recipient of the Principal Award, he is the senior class president.

Leena Mehendale carries a 4.13 grade-point average on a 4.0 scale and is an AP Scholar with Honor. An All-Southwest Preparatory Conference performer in soccer, cross country and track, she serves as a team captain in all three sports. In addition, Mehendale is a member of the Sting Dallas soccer club. She is a three-time recipient of the President’s Gold Volunteer Service Award. She also is the president of the Hockaday Social Impact Board and the founder of run2learn, a nonprofit organization.

Luke Moore owns a 4.65 GPA on a 4.0 scale while securing varsity letters in track, cross country and tennis. He claimed the 800-meter title at the 2021 TAPPS 4A State Track Championships and has earned first-team all-state honors in track and cross country. In tennis, Moore has twice placed third in doubles at the state tournament and has been named honorable mention all-state. A National Merit Scholar semifinalist, he is a student council member and the founder and executive director of the Knowing Neighbors nonprofit organization.

Tyler Nguyen ranks first among his class of 633 students with a 4.0 grade-point average. A three-year letterman on the varsity soccer team, he has been named first-team All-District 5-6A and was district Defensive Newcomer of the Year in 2020. Nguyen was awarded the Northwest Independent School District’s Board of Trustees Award in 2021. An AP Scholar with Distinction, he has claimed the President’s Silver Volunteer Award. He also is a founding member of the school’s Asian American Club.

Hailey Tucker is listed first among 578 students with a 106.529 GPA on a weighted 100-point scale. She is a four-year varsity letter winner in volleyball and track, and has earned three letters in wrestling. In volleyball, she was Academic All-State in 2021 and nabbed first-team all-district and academic all-district honors all four years. In wrestling, she placed third at the 2021 UIL Class 6A State Meet. A National Merit Commended Scholar, she is the senior class president and the National Honor Society treasurer.

About the Davey O’Brien Foundation

The Davey O’Brien Foundation was founded in 1977 to honor and remember the strong character and leadership of football great, Davey O’Brien. Widely known for its Davey O’Brien National Quarterback Award, the Foundation recognizes champions on and off the field through awards programs encouraging academic and career success. The Foundation has given away more than $1.2 million in scholarships and university grants to help high school and college athletes transform leadership on the field to leadership in life. For more information, visit www.DaveyOBrien.org.