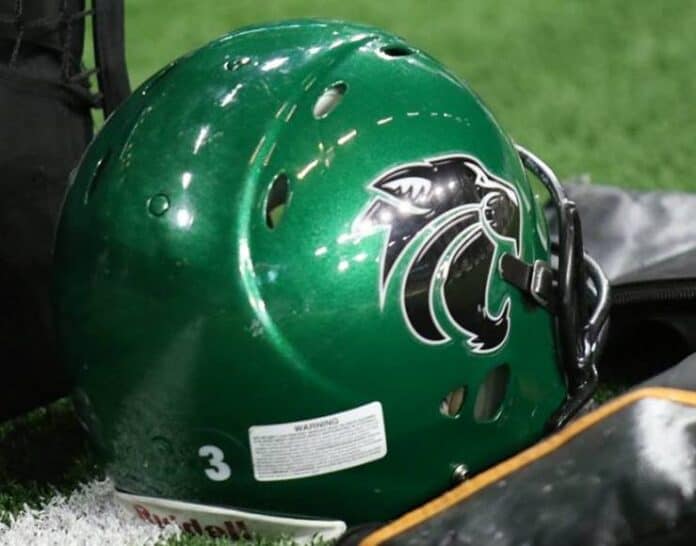 4A Kennedale takes a step up in their next opponent, the 5A Division II Denison Yellow Jackets. This is not a completely new opponent for Kennedale. The Wildcats and the Yellow Jackets played a two-game series in 2011 and 2012. The Cats swept that series.

This year’s district opponents for the Jackets include some familiar names to Kennedale followers including Crandall, Melissa, Princeton, and Terrell along with Poteet, Greenville, and Lovejoy.

Denison has a long football history dating back to 1902 according to texashighshchoolfootballhistory.com and has had many highly successful seasons. They have not missed the playoffs in the last nine years. Second-year Head Coach Brent Whitson is hoping to recapture more of the 12-1 and 13-2 season records of years past.

The Yellow Jackets lost much to graduation last year, returning 4 starters on offense and 4 on defense. But they do have some playmakers at the quarterback and running back positions along with strong performers in the defensive backfield and along the offensive line.

Denison like Kennedale has won one and lost one so far this season. In their opener, the Yellow Jackets beat Sherman 28-21 but then lost to Frisco Reedy 41-7 last week.

The Wildcats are still filling gaps due to early-season injuries. The Cats got a needed lift with their win last week over Alvarado 27-12 but will need all of their playmakers and more when facing their bigger opponent this week.

As it stands, Wildcat will enter the playoffs as a 2nd seed, Lady Kats as...