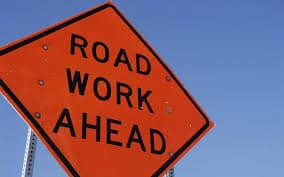 This article has been updated with a diagram of where the new lanes will be built – scroll to the end of the article.

This is the long-awaited fix for the small almost “one-lane” bridge between Steeplechase Trail and Coker Valley Drive along Sublett Road.

Always an accident waiting to happen, the bridge over Kee Branch was never meant for the current traffic load that includes cars, pick-ups, semis, school buses, bike riders, joggers, and kids walking to and from school.

Explainer: The roadway is actually in Arlington city boundaries with the Kennedale city limits running along the south side of the street. It has been caught in that no man-land between the beginning of Kennedale control up the hill from the Steeplechase edition and the development that came in with Kroger Marketplace.

Most of the street improvement in front of Kroger was paid for by the developers. The new improvements were approved by Arlington voters several years ago.

Arlington plans call for the construction of a three-lane concrete road along with other improvements.

The Kennedale City Council considered earlier this month and approved an interlocal agreement with the City of Arlington that listed responsibilities and areas of cooperation needed.

The following information has been posted by the City of Arlington …

This project aims to rebuild W. Sublett Road, between Joplin Road and the west city limits, from a two-lane county-type road to a three-lane concrete road. Additional improvements planned to be completed under this project include the following:

Funding for this project was approved by Arlington voters as part of the $138M Street Improvements package in the 2018 Bond Election and is currently in the design phase.

Construction is anticipated to begin in January 2022.