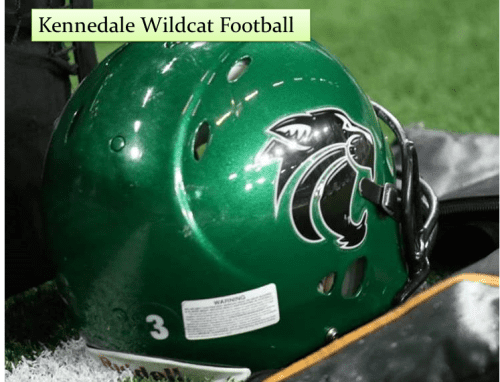 Imagine the scene, a longtime successful head football coach calls over a player after the practice has finished for the day.  It is the day before the final game of the regular season and the district title is on the line along with another undefeated district season.

The varsity team is in desperate need of a fill-in kicker since the current kicker, one of the best in the league, will not be available for the big game. The player that the coach wants to talk to is a freshman that on the roster weighs 110 lbs and tops out at 5’ 7” and had not played a high school varsity down.

The coach asks the player for a demonstration of his kicking. Afterward, the coach tells him to hit the showers, and, says, by the way, he wants him to suit out with the varsity the next day.

At the pre-game team meeting, the coach introduces the freshman to the varsity members, and the team of veterans rises to give him an impromptu standing ovation.

The player plays in the game that night and goes 9 for 9 in extra-point kicks, not one of his 10 kick-offs is returned for yardage and he averages 41 yards per kick.  And, to the coach’s satisfaction, he places the kicks just where his coaches need them.

The team clinches the undefeated title and the first seed for the playoffs. The camera fades to the scoreboard.

This was not a Hollywood story.  It really played out on the field at Handley Stadium last Friday night. The team is the Kennedale Wildcats, the coach is Richard Barrett and the freshman is Lance Pate.

Now if it was a really feel-good movie, Pate would have kicked the winning point and ridden off on the shoulder of the team.  As it happens, Kennedale bulldozed the Benbrook Bobcats 63-0.

Pate’s contributions were just part of that blow-out number. But, still for a freshman to perform at that level, under those circumstances, was truly a remarkable feat. Better than even Coach Barrett expected.

And, yes, Lance really did get his own made-for-a-movie moment when the varsity team gave him a standing ovation in a show of support after it was announced that the freshman would be the team’s kicker for the game.

This was an ending that any freshman would dream to have.

The Kennedale Wildcats are currently 3-1.  They are coming off an unusual 13-13 mark last season. While that was close, the Cats have not...

Texas is growing and fast, giving new meaning to “Everything in Texas is bigger!”

April 20, 2021
By Meredith RoseEight students from Fellowship Academy in Kennedale, TX, visited the Bluebonnet Surgery Pavilion in Waxahachie last month to gain exposure to surgery and enhance their understanding of the medical field. The students who participated are enrolled in Fellowship’s Health Science track, part of...
Read more

Arlington to begin rebuild of Sublett Rd – Joplin to Kennedale...

Texas is growing and fast, giving new meaning to “Everything in...

Who are we in Kennedale?